Thomas Chandler Haliburton and his Family

Haliburton House Museum, then known as Clifton, was home to Thomas Chandler Haliburton and Louisa Neville Haliburton, and their eight children.

Thomas Chandler Haliburton was much influenced, in his political and social views by his grandparents, parents, his education – Elite, Tory, Loyalist, Anglican – along with a long-standing family desire to be considered part of the gentry.

His grandparents, William and Lusanna Haliburton, came to the established town of Windsor as New England Planters in the early 1760s. William became a prosperous lawyer and judge, and for at least some time was known to have been to be a slaveowner in Nova Scotia (Slavery would officially be abolished in British North America in 1834). William was an important figure in young Thomas Chandler Haliburton’s life, who would later be known to support anti-abolitionist ideas like his grandfather.

Thomas Chandler Haliburton was born in 1796 into an elite life. His father, another William, was also a lawyer and judge. His mother, Lucy Chandler Grant, from a Loyalist family, died in the first year of Thomas’s life. William remarried six years later to Susanna Davis, daughter of a former lieutenant-governor of Nova Scotia, who similarly had a Loyalist pedigree.

Young Haliburton attended the grammar school in Windsor, and at age 14 would enter the elite King’s College in Windsor, graduating in 1815. 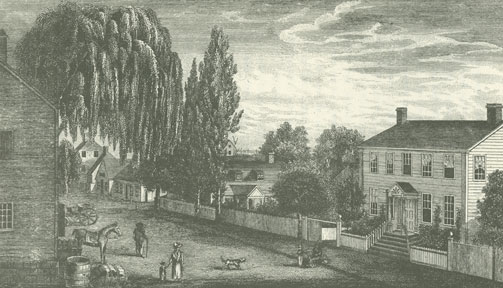 Getting Established – Family and Career

In 1816 Haliburton met and very soon after, married his wife Louisa Neville on one of his first trips to England. Louisa was educated and accomplished in music, art, gardening, and horticulture. They returned to Windsor and were soon expecting their first child. They would go onto have a large family: five daughters and three sons, plus three sons who did not survive infancy.

The young family moved to Annapolis Royal in 1820 where Haliburton established his own law practice. He was promoted to Judge of Probate in 1824 and started his political career as representative for Annapolis County in the Nova Scotia House of Assembly (1826 to 1829). Haliburton was a controversial politician and advocated for a public-school system for the colony. He used his powers of oratory and humour to great advantage to be deeply critical of those who did not support his ideas.

It was during this time in Halifax as a politician that Haliburton’s literary career began. He joined Joseph Howe, his political rival, newspaper owner and new friend, along with several other aspiring literati to form “The Club.” In 1829, his first book An Historical and Statistical Account of Nova Scotia, in two volumes, was published by Howe.

In 1829 Haliburton became a Judge of the Inferior Court of Common Pleas, a position made available by his father’s death. This position allowed him more time to pursue his literary ambitions and travel around the province hearing cases. As a judge he was known, and sometimes critiqued, for his levity. His joking however did not diminish his reputation for understanding law or human nature. Haliburton’s new position allowed him to return his family to Windsor, where he eventually had Clifton built.

Around the same time, he began contributing to Joseph Howe’s newspaper the Novascotian, stories featuring his character the fast-talking Yankee clock peddler Sam Slick. They were published in the first of several books in 1836. These stories were often inspired by his experiences as a judge travelling throughout Nova Scotia and allowed him to poke fun at Nova Scotians.

While Haliburton traveled and pursued his career, Louisa was responsible for the household, taking a particular interest in horticulture. Life in Windsor in the 1830s has been compared to a Jane Austen novel. As an elite family in Nova Scotia, the Haliburton family regularly hosted and were invited to dances, dinner, skating parties, musical performances, plus walks and visits. Louisa was said to own the only piano in Windsor. 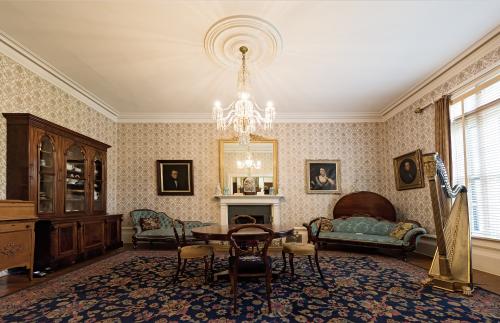 Despite this life of luxury, with their children being given the “proper” education and social introductions, life was not without its difficulties. Louisa, suddenly, died of an unknown illness at the age of 48, while in Halifax for “the social season” with the family. This loss left Haliburton devastated. 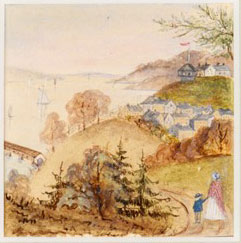 Watercolour believed to be painted by one of Haliburton’s daughters. Possibly Louisa and one of younger Haliburton sons in Windsor, Nova Scotia. NSM 89.95.

A Family to Send into the World

The death of Louisa in 1841 came only months after the Inferior Court of Common Pleas was abolished. Haliburton was appointed as a justice to the Supreme Court of Nova Scotia. At this time his oldest child, Susanna, was 24 and still at home. His youngest, Arthur Lawrence was only 9. With the help of his daughters, life continued at Clifton – education, social events, courtships – as well as increased travel for Haliburton in his new role. 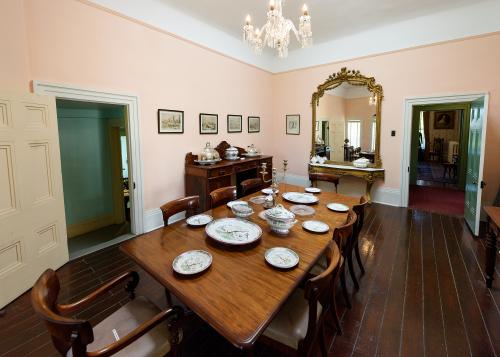 Haliburton’s daughters were very accomplished, particularly in artwork. Today artworks attributed to Susanna are preserved in the Nova Scotia Museum Collection, and pieces by other daughters are held in other Canadian collections.  Susanna married a New Brunswick judge and like her father, took an interest in history, which led to her forming the Weldon china collection. Augusta would marry the son of an iron master and Laura the son of Sir Samuel Cunard, shipping magnate. Emma and Amelia both married successful Anglican clergymen.

Haliburton’s three sons, as men in the 1800s had more opportunities than their sisters. The oldest, Tom Jr., was an accomplished musician, having studied in Germany. He became increasingly ill with an “original defect of mind” resulting in him being admitted to an insane asylum in Massachusetts, where he died at the age of 26. Robert become a lawyer and early anthropologist (anthropology being a new and unscientific field of study at this time, heavily influence by British imperialistic views). Arthur, Haliburton’s youngest son moved to England, where after a career in the British civil service, he would become 1st Baron Haliburton, the first native Canadian to be raised to the Peerage of the United Kingdom.

Haliburton remained in at Clifton, until all his daughters were married. In 1856 he retired with a small pension. The last few years had brought several social, health, and financial set-backs leaving him with little reason to stay in Windsor.  Haliburton sold the estate, auctioned off the furnishings and moved to England, ironically something he mocked other elite Nova Scotians for aspiring to.

Within a few months, Haliburton remarried, to a wealthy widow friend Sarah Harriet Williams. The couple lived a typical upper-class Victorian life at Gordon House, in London.  He would serve one term as a Member of Parliament in England and continued writing. His contributions to literature and popularization of his character Sam Slick would ensure he would be remembered long after his death in 1865 at age 68.